'The stories are filtered through my blood and nerves'

What do you do when your native country no longer exists? If you’re novelist Josip Novakovich you eulogize it in a collection of short stories that circles around themes of home and change.

In Ex-Yu, published by Véhicule Press, Novakovich brings together a cast of fictional characters to populate a very real landscape born out of the ashes of Yugoslavia.

With his trademark melancholic observations and sardonic wit, he takes readers into the brutal anguish of the Bosnian War and beyond; weaving a complex picture of the place he once called home.

“The title has several meanings. It’s both a reference to ex-Yugoslavia, and a gesture toward your former self — whomever that might be,” says Novakovich, who teaches creative writing in Concordia’s Department of English, and is a winner of both the American Book Award and the Whiting Writers’ Award. “It’s also meant to show that, as the fate of countries evolves and changes, so do we, even if we don’t immediately realize what those changes are.”

Novakovich himself is no stranger to change. The short-story writer, novelist and essayist was born in what is now Croatia, where he grew up under the authoritarian regime of Josip Broz Tito. He studied medicine in Serbia before moving to the United States where he continued his schooling, first in psychology at Vassar College and later in divinity at Yale and creative writing at Texas University.

“Emigrating from Croatia and experiencing culture clash in the United States gave me many ideas of what to write,” he recalls. “And then, later on, the war in Croatia, because it was such a shock, gave me a lot of questions, which I am still attempting to answer through stories like the ones in Ex-Yu.”

Although he lives in Montreal, Novakovich often travels to the countries that make up ex-Yugoslavia. And he takes inspiration from what he sees there.

“In Croatia, Serbia and Bosnia, I continue to encounter protests, poverty and discontent — this is not what the new countries expected to have 20 years after the war. I’m disturbed and puzzled by it, so I write stories set in the region once again to think and understand better than I do without writing about it. That’s where Ex-Yu comes from.” 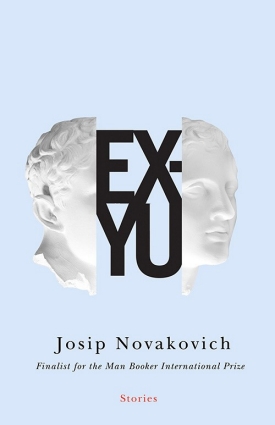 While the book is a work of fiction, he explains that its details, tastes and smells mostly come from his personal experiences, reflected in the photos above by his wife, Jeanette Novakovich, who is herself a writer and visual artist.

“Some stories come from reading — the news and so forth — but even then, the details I use to visualize and set the stories are filtered through my blood and nerves.”

Another major upheaval for Novakovich was the sudden, career-marking coup of being named a finalist for one of the world’s most prestigious literary awards, the Man Booker International Prize, in 2013.

The accompanying recognition and attention put Novakovich under an immediate and intense spotlight, but he says it hasn’t altered him as a writer. “The Booker nomination was a whirlwind of travel and interviews, and though I didn’t win, I have the sense that things are easier now than they were before. The writing remains the same.”

Readers can judge for themselves on Thursday, October 15, when Ex-Yu will have its official, public launch at Montreal’s Drawn & Quarterly bookstore (211 Bernard Ave. W.) at 7 p.m. The event is free and open to the public, and Novakovich will be on hand to read from the book and answer questions.