‘I thought it would be interesting to share my discoveries’ 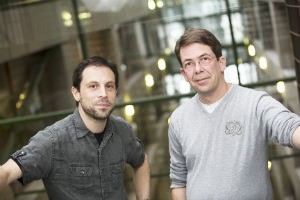 Davy Bigot and Fabien Olivry from the Département d’études françaises: “Professors at Concordia can propose a project that, if accepted, will increase their visibility and position.”

The first of its kind, the course Bigot submitted to the UOH takes a variationist sociolinguistic approach to studying the French language in Western Canada. “Very often we speak about French in Quebec or Acadia,” Bigot explains, “but there’s a large French population in Western Canada as well, which is my specialty. I’ve been working on this topic for eight or nine years and thought it would be interesting to share my discoveries.”

With his contribution to the UOH, Bigot is quite literally sharing his course with the entire French-speaking world. The resource is available free of charge to students and instructors at other universities who can use it in whole or in part to augment their own course materials.

The UOH is one of seven thematic digital universities created by France’s Ministère de l’Enseignement supérieur et de la Recherche. They exist to improve the grades of both undergraduate and graduate students and to provide visibility for the 23,000 resources made available through its member institutions.

The free online courses available through the UOH cover a wide range of humanities subjects. While approved by a committee of scientific advisors, they all remain non-credit offerings designed simply to complement learning.

Given the UOH only publishes resources that are the result of inter-university partnerships, Bigot prepared his course in collaboration with his former supervisor from UQAM’s Department of Linguistics, Robert Papen.

It contains three modules. The first is an explanation of the particular brand of sociolinguistic studies it employs, known as variationist sociolinguistics. The second module provides a broad history of French settlement in Western Canada. As Bigot explains, “When we undertake sociolinguistics, we must know the history of the people we’re examining.”

The third module of the course provides a complete description of the type of French spoken in Western Canada, along with a series of five contemporary case studies. “These permit us to present les français de l’Ouest in relation to very precise sociolinguistic examples, which we pulled from interviews.”

Essentially, the course enables language students to start with a basic understanding of sociolinguistics and go on to a master’s level from there. “I would say it’s almost exhaustive,” notes Bigot.

A unique funding and publishing opportunity

Bigot’s colleague Fabien Olivry, a professor in the Département d’études françaises, led the project to get Concordia into the UOH. He hopes francophone professors at the university will follow Bigot’s example and seize upon the opportunity to contribute to the open university’s online catalog. In return, he says, they’ll receive funding for their work along with exposure through a very well known and respected resource.

He points out that a second Concordia project, from Adel Jebali, an assistant professor in the Département d’études françaises (Cours de clitiques pour les non-francophones et enseignants du FLE) has already been accepted by the UOH and received a grant. It should be published by the end of this year.

As Olivry explains, applicants don’t have to submit proposals for full courses that take an entire sabbatical to prepare. “There's no ideal size. If professors want to publish just a series of short video capsules, for example, that’s fine too.”

And, he adds, if a professor’s project is accepted, it will not only increase his or her visibility in the academic world, but also create a resource that is free and accessible to everyone.

It’s this open-access component of the UOH that most excites Bigot. “When we do research at the university, the point is to share the results through publication. We can follow the same principles for pedagogy. You create a resource, UOH finances it in part, and afterwards it’s available to students and teachers who want to use it.”