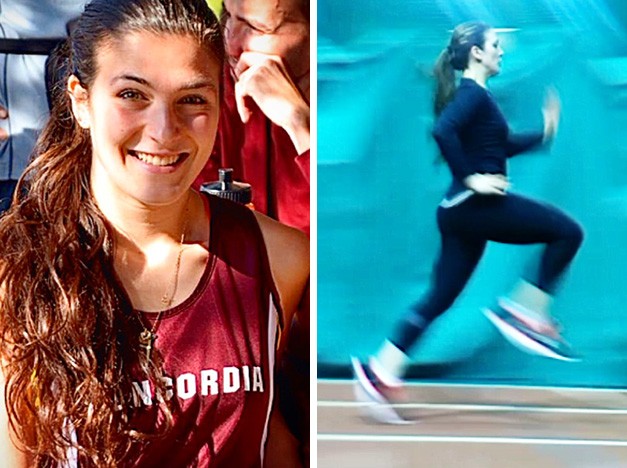 Paula Giannone, a member of the cross-country running team, is helping with the rebranding: “It really means a lot to me to be able to represent both the Concordia student body and the Stingers.” | Courtesy Paula Giannone

When Recreation and Athletics put out the call for students to get involved in the Stingers rebranding project, they weren’t sure what kind of response they would get. In the end, they were pleasantly surprised by the wide diversity of applicants, says Liam Mahoney, multimedia coordinator of the department.

“We figured that our athletes would want to participate but we weren't expecting so many different types of students from so many different departments. It was really encouraging to see how many of them want to be involved with the Stingers, even if they’re not athletes themselves.”

The multidisciplinary team consists of 20 students. The writers in the group have begun preparing texts to be used in videos, publications and on the university’s multimedia platforms. For the time being, though, everything is very hush-hush.

“I can’t disclose any details of what tasks I'm assigned to, unfortunately. But I can tell you it's an amazing project to be a part of and I'm looking forward to what’s ahead,” says Ana Gabriela Avendano Zablah, a Master’s student in Educational technology, who was chosen for the writing team.

An avid soccer and football fan who studied marketing and communications as an undergraduate, Zablah says she didn’t think twice about applying to join the rebranding team. “I wanted to leave a mark on Concordia that will continue to stand after I've graduated,” she says. “This is perfect for me because I not only get to do what I love, but I also have the pleasure of meeting and working with some very talented and amazing people.”

Due for a change

Patrick Boivin, director of Recreation and Athletics, explains that the idea behind the new look was to create a unifying identity for the Stingers that inspires both the teams and the fans — one that’s steeped in the university’s long athletic history.

“We were due for a change but wanted something more than just a new logo,” he explains. “The logo is just the tip of the iceberg, there’s a lot more to the story.” 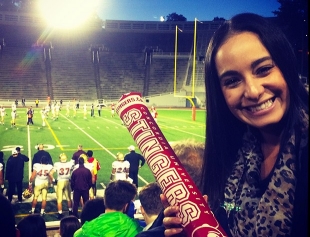 Local marketing firm Cossette was hired to develop the recently finalized new look, which will be made public later this summer. Boivin’s department decided early on that it was imperative to get students involved as much as possible in supporting the new brand.

“Our athletes are students first and foremost,” states Boivin, “so in the effort to engage the rest of the student body — and get them interested as fans — we knew we had to find a way to get them directly involved in the creative process we’re undertaking.”

Paula Giannone, a member of the Stingers cross-country running team, says she applied immediately once she heard about the opportunity through social media. “It really means a lot to me to be able to represent both the Concordia student body and the Stingers,” she says.

Along with Zablah and the other members of the writing team, Giannone is drafting scripts related to what she calls the core objectives of the rebranding. Mahoney and the team from Cossette are supporting their work.

“Everyone works together as a single unit, which is key when creating a project like this, one that aims to unify the greater Concordia community,” Giannone says, adding that she's confident the rebranding will be a success. “I really feel that it’s going to have a huge positive impact and instill a renewed school spirit and pride.”

Soon, photographers and videographers will begin creating the visual content for the rebranding. Award-winning photographer, videographer and Concordia alum John Londono will be overseeing their work. “John has a really unique style of photography and filmmaking that we thought would really represent our new brand,” says Mahoney. “He’ll be making sure the students’ work is in line with the mood and feeling we’re going for.”

Boivin says the Stingers new logo will be painted on the Concordia Stadium field by early August, but that the official launch of the new brand will only take place when the football team takes to the field for their first evening game on Friday, September 4, against Université de Sherbrooke.

“It will be the first time that the new uniform appears on the field of play,” he continues, adding that he’s fairly optimistic the new look will be well received. To date, the coaches and athletes who’ve been given a sneak peek have all responded very positively. “So far so good, but you never know until you actually get it into the public eye.”