Rookie football coach receives the top honour for his work with the Stingers
|
By Tiffany Lafleur, with files from Athletics 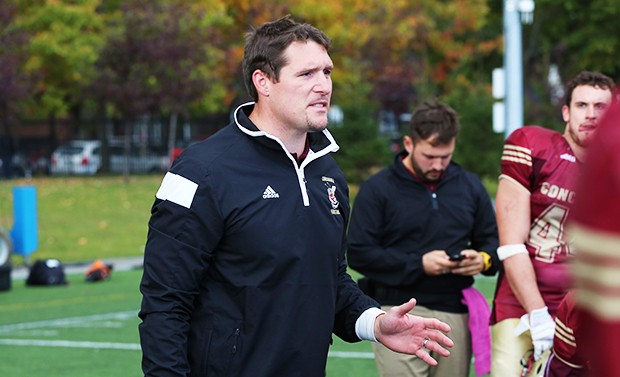 Mickey Donovan, a Stinger from 2002 to 2004, was an accomplished linebacker. | Photo courtesy of Recreation and Athletics

Everyone was talking about Mickey Donovan this season – stories about the first-year coach of the Concordia football team were the most viewed on the Athletics website last month. It’s perhaps not surprising, since he led the Stingers to the play-offs for the first time since 2011.

Although the Stingers’ season ended with a conference semi-final loss to Laval on November 8, Donovan is about to attract even more buzz. On Friday, November 14, at a special ceremony in Quebec City, he was named the Réseau du sports étudiant du Québec (RSEQ) conference Coach of the Year.

Patrick Boivin, director of Recreation and Athletics, says that Donovan’s work with the Stingers this season is something he should be proud of. “Mickey turned the team around and invested himself wholeheartedly in every player’s success. He had high demands for himself and asked the same of his players. He deserves this award.”

In his first year as a head coach at the Canadian Interuniversity Sport (CIS) level, Donovan directed the Stingers to a 5-3 regular season win-loss record. They finished fourth in the conference and secured a spot in the play-offs. During the third week of play, the Stingers made their appearance in the Canadian Interuniversity Sport (CIS) top-10 rankings, where they stayed for six weeks.

“It speaks to the work and effort that the coaching staff as a whole put in the team,” says Boivin. “This is year one – the program will continue to progress with this work ethic and dedication.”

Donovan returned to Concordia to take charge of the team 10 years after wearing the Stingers jersey himself. The Laconia, New Hampshire native dominated the Canadian university ranks as a linebacker from 2002 through 2004. He was a two-time Quebec All-Star and a two-time CIS All-Canadian. In 2004 he was awarded the President’s Trophy as the top defensive player in Canadian university football.

Donovan was selected as the RSEQ Coach of the Year by a panel of media professionals, head coaches and athletic directors. The honour also means he is the conference’s nominee for the Frank Tindall Trophy, presented to the CIS Coach of the Year during the Vanier Cup festivities in Montreal at the end of November.

Before returning to Concordia as the fifth head coach in football’s 40-year history at the university, Donovan was assistant head coach and defensive coordinator with the McGill Redmen. He was a member of the Western Mustangs coaching staff between 2007 and 2011, handling special teams, the defensive front seven, and serving as the team’s recruiting coordinator.