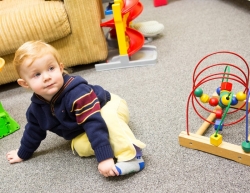 Agence QMI publishes an article about research conducted by Rachel Baker, a former psychology doctoral student, and Diane Poulin-Dubois, professor in the Department of Psychology and researcher in the CRDH. Their study showed that babies between 10 and 20 months can tell the difference between the kinds of paths naturally taken by a walking animal when compared to a moving car or an inanimate object. The story is reprised by TVA Nouvelles, Yahoo! Québec Être, Nouvelles France 3. An article on the research is also published by ANI News, which is reprised by Big News Network, Deccan Chronicle, The Economic Times, The Times of India, India Today, India.com, The Health Site, Austrian Tribune, Zee News, Jagran Post, Before It’s News, Medical Xpress, and Press-News.