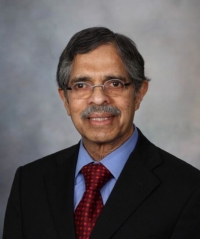 Insulin deficiency and resistance have profound effects on skeletal muscle and brain mitochondrial biology and metabolism. The talk will focus on molecular and metabolic mechanisms on how exercise counteracts altered mitochondria metabolism in insulin resistant states.

The following will be discussed:

K. Sreekumaran Nair, M.D., Ph.D., is a Professor of Medicine and Endocrinologist in the Division of Endocrinology, Diabetes, Nutrition and Metabolism in the Department of Internal Medicine at Mayo Clinic Rochester. He is currently the Principal Investigator (Mayo Clinic) of NIH Molecular Transducers of Physical Activity Benefits. He is recognized as a Distinguished Investigator at Mayo Clinic with the distinction of a named professorship, the David H. Murdock-Dole Food Company Professorship.