PERFORM Colloquium: Moving to the beat for motor rehabilitation

This event is Free 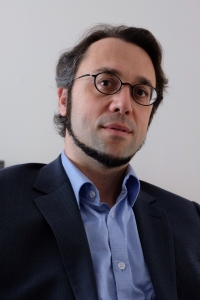 Rhythmic skills are widespread in humans. Most of us, musicians and non-musicians alike, can perceive the underlying pulse when listening to music, and move to the beat of music. Here I will show that these abilities can be exploited for the purpose of motor rehabilitation. I will focus in particular on rehabilitation of gait disorders in patients with Parkinson's disease (PD). There is clinical evidence that gait dysfunctions in PD can be partly relieved by rhythmic stimulation. This consists in asking patients to walk with a rhythmic auditory stimulus such as a metronome or music. The effect on gait is visible immediately in terms of increased speed and stride length. Moreover, training programs based on rhythmic cueing can have long-term benefits. The effect of rhythmic cueing, however, varies from one patient to the other. Patients’ response to the stimulation may depend on rhythmic abilities, often deteriorating with the disease. Relatively spared abilities to track the beat favor a positive response to rhythmic cueing. On the other hand, most patients with poor rhythmic abilities either do not respond to the cues or experience gait worsening when walking with cues. Here I propose an individualized approach to rhythmic auditory cueing with music to cope with this variability in patients’ response. This approach calls for using assistive mobile technologies capable of delivering cues that adapt in real time to patients’ gait kinematics, thus affording step synchronization to the beat.

Simone Dalla Bella studied cognitive psychology at the University of Padua (Italy), completed a Ph.D. in cognitive neuropsychology at the University of Montreal (Canada), and received a Habilitation degree from the University of Warsaw (Poland). He also obtained a Master degree in piano performance from the Conservatory of music of Mantua (Italy). He is currently full Professor in the Department of Psychology at the University of Montreal (Canada), and from June 2018 Co-director of the International Laboratory for Brain, Music and Sound Research (BRAMS, Montreal). His research interests concern the cognitive and neuronal mechanisms underpinning music perception and performance. His research has focused on musical skills, such as pitch and rhythm perception/production, in the general population as well as in individuals with musical deficits (tone deafness and beat deafness). Current research is centered around 1) the evaluation and profiling of rhythmic abilities in healthy individuals and patient populations (e.g., patients with Parkinson’s disease, ADHD), and 2) the use of rhythmic stimulation and training to improve motor skills (e.g., gait and speech in patients with Parkinson’s disease). He uses behavioral methods, motion capture, EEG, and exploits new mobile technologies for testing and training purposes.