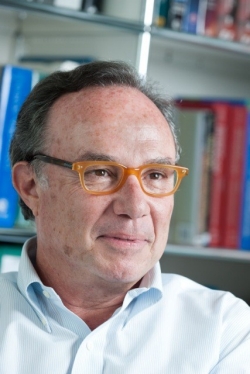 A tight metabolic coupling between astrocytes and neurons is a key feature of brain energy metabolism (Magistretti and Allaman, 2015). Over the years we have described two basic mechanisms of neurometabolic coupling. First the glycogenolytic effect of VIP - restricted to cortical columns - and of noradrenaline - spanning across functionally distinct cortical areas - indicating a regulation of brain homeostasis by neurotransmitters acting on astrocytes, as glycogen is exclusively localized in these cells. Second, the glutamate-stimulated aerobic glycolysis in astrocytes. This metabolic response is mediated by the sodium-coupled reuptake of glutamate by astrocytes and the ensuing activation of the Na-K-ATPase. Both the VIP-and noradrenaline-induced glycogenolysis and the glutamate-stimulated aerobic glycolysis result in the release of lactate from astrocytes as an energy substrate for neurons (Magistretti and Allaman, 2015).

We have recently revealed a second function of lactate, as a signaling molecule for plasticity. Indeed we have shown that lactate is necessary for long-term memory consolidation and for maintenance of LTP (Suzuki et al, 2011). The role of astrocyte-neuron lactate transfer is not restricted to the hippocampus nor to formation of aversive memories. Indeed in the basolateral amygdala lactate is necessary for the formation of an appetitive memory such as conditioned place preference for cocaine (Boury-Jamot etal, 2015).
At the molecular level we have found that L-lactate stimulates the expression of synaptic plasticity-related genes such as Arc, Zif268 and BDNF through a mechanism involving NMDA receptor activity and its downstream signaling cascade Erk1/2 (Yang et al, 2014). L-lactate potentiates NMDA receptor-mediated currents and the ensuing increases in intracellular calcium. These results reveal a novel action of L-lactate as a signaling molecule for neuronal plasticity.

This objectives of this talk are to:

Pierre J. Magistretti, received his MD in 1979 from the University of Geneva and his PhD in Biology in 1982 from UCSD. He is Professor at the Brain Mind Institute at EPFL and at the Division at Biological and Environmental Sciences and Engineering at KAUST. Pierre J. Magistretti’s laboratory has discovered some of the cellular and molecular mechanisms that underlie the coupling between neuronal activity and energy consumption by revealing the key role that glial cells, in particular astrocytes, play in this physiological process. These findings are particularly relevant for understanding the origin of the signals detected by functional brain imaging, and are revealing a role of astrocytes in neuronal plasticity and neuroprotection. He is the author of over 240 publications in international peer-reviewed journals and has given over 70 invited lectures during the past five years. He has been elected at the International Chair 2007-2008 of the Collège de France, Paris. He is member of Academia Europae and of the Swiss Academy of Medical Sciences. Among other recognitions, Pierre Magistretti has been awarded the Camillo Golgi Medal Award, the Emil Kraepelin Professorship, the Goethe Award of the Canadian Psychological Association and the Ott Prize of the Swiss Academy of Medical Sciences. Recently, he shared with David Attwell and Marcus Raichle the 2016 IPSEN Foundation Prize. Pierre Magistretti is a honorary member of the Chinese Association of Physiological Sciences. He is the Past-President of the Federation of European Neuroscience Societies (FENS) and Past‐Secretary General of the International Brain Research Organization (IBRO) of which he is now President since 2014. He is on the Board of Trustees of HFSPO and a Fellow of the American College of Psychopharmacology. He is and has been member of several academic scientific advisory boards including the Research Council of the Swiss National Science Foundation. He is the Vice-Chairman of the European Dana Alliance for the Brain(EDAB) since 2002 and is member of the Dana Alliance for Brain Initiatives (DABI) and in this capacity he is strongly engaged in the public understanding of neuroscience.