The Anatomy of Failure

From Margaret Atwood to Angela Merkel to Oprah Winfrey, many leaders have had to build on adversity and rise above career obstacles.

Join us for an honest discussion as diverse Concordia alumnae share the lessons they’ve learned about risk, failure and business success. 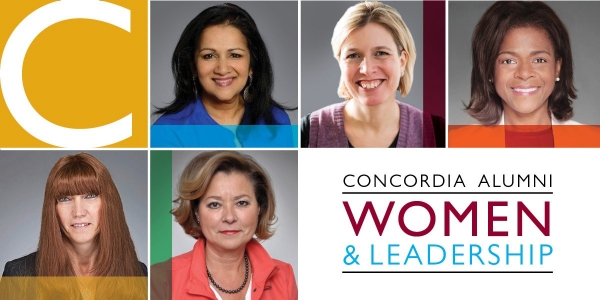 Kimberley Manning is an associate professor of political science and principal of Concordia's Simone de Beauvoir Institute. She specializes in Chinese politics, women and politics, and the rights of transgender children and youth. She analyzes family ties and politics through the lens of feminist theory.

With more than 25 years of experience, Madeleine Féquière is a specialist in risk management and operations associated with business credit, improving credit conditions and global trade. She is also actively involved in business and humanitarian causes, with two decades of service on numerous boards. She was recently appointed to the board of directors for Tourisme Montréal and is the president of the Montreal chapter of the International Women’s Forum.

From 2004 until January 2017, Anna Martini led Groupe Dynamite —  a women’s fashion business operating nearly 370 stores in Canada, the United Sates and, most recently, the Middle East. Before taking the helm of Groupe Dynamite, Martini was a partner at the Montreal office of Deloitte — one of the world’s largest professional services firms. “Concordia was the baseline for my entire career," Martini says. "The university set me up for success — first as an accountant and now as a business leader."

Mackie Vadacchino is a seasoned senior executive with strengths in sales, marketing and negotiations of strategic alliances and a successful background in restructuring and growing business profitability, both nationally and internationally. An excellent business developer, manager and communicator with dual nationality, she is fluently bilingual and bicultural (English and French), and also speaks Italian.

Sudha Krishnan works as a television, radio and web journalist. You can hear her every Saturday morning reading the news on CBC Radio One. Her passion is diversity reporting and focusing on visible minority women.