Jean Chrétien lecture - Canada: Its own flag. Its own destiny

The Right Honourable Jean Chrétien, LLD 10, served as Canada's 20th prime minister, from 1993 to 2003. His lecture will be followed by a conversation moderated by by CTV Montreal News co-anchor Mutsumi Takahashi, BA 79, MBA 95, LLD 13.

SOLD OUT | Registration has closed.

Part of the Henri P. Habib Distinguished Speakers' Series on Peace, Conflict and Global Politics in the 21st Century, organized in collaboration with the Department of Political Science. 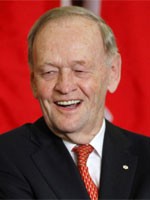 A native of Shawinigan, Quebec, Jean Chrétien, LLD 10, completed his law studies at Université Laval and was admitted to the Québec Bar in 1958. He is also a member of the Ontario Bar. He was elected Member of the House of Commons in 1963. During his career, he also served as Deputy Prime Minister, Minister of Finance, Minister of Industry, Trade and Commerce, among many other roles.

Chrétien was sworn in as Canada’s 20th Prime Minister of Canada in 1993 after winning a majority of the seats in the House of Commons. He was re-elected with majorities in 1997 and 2000. As Prime Minister, he stressed balanced budgets, national unity and a strengthened place for Canada in the world. His government’s legacy also includes a number of social reform and humanitarian initiatives.

He left public in 2003. He then served as counsel at Heenan Blaikie, LLP. In February 2014, Chrétien joined Dentons Canada LLP as counsel.

He was appointed Companion of the Order of Canada in 2007. In 2009, he was awarded the Order of Merit by Her Majesty Elizabeth II.

In 2008, he became co-president of the InterAction Council, which develops solutions for the political, economic and social problems confronting the global community.

Concordia awarded Chrétien an honorary doctor of laws (LLD) in 2010. 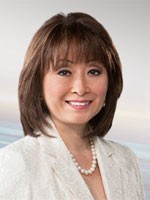 Takahashi's interest in broadcasting began at Concordia University where she worked at Radio Sir George (CRSG) and the student newspaper, The Georgian. She also hosted a series of interview programs for Concordia University TV (CUTV) in conjunction with CTV Montreal, then known as CFCF 12.

She began her broadcast career as an intern at CKGM and then as a newsreader and interviewer at CJFM. Takahashi arrived at CFCF 12 in 1982 as a news reporter and took her place at the anchor desk of CFCF News four years later.

Takahashi shared the 6 p.m. weeknight news anchor desk with RTNDA Lifetime Achievement recipient Bill Haugland, from 1986 until his retirement in 2006. She continues to share the anchor desk at 6 p.m. and hosts the noontime newscast.

In 2013, she was awarded an honorary doctor of laws (LLD) by her alma mater.