Spectrum: A performance on queerness and freedom 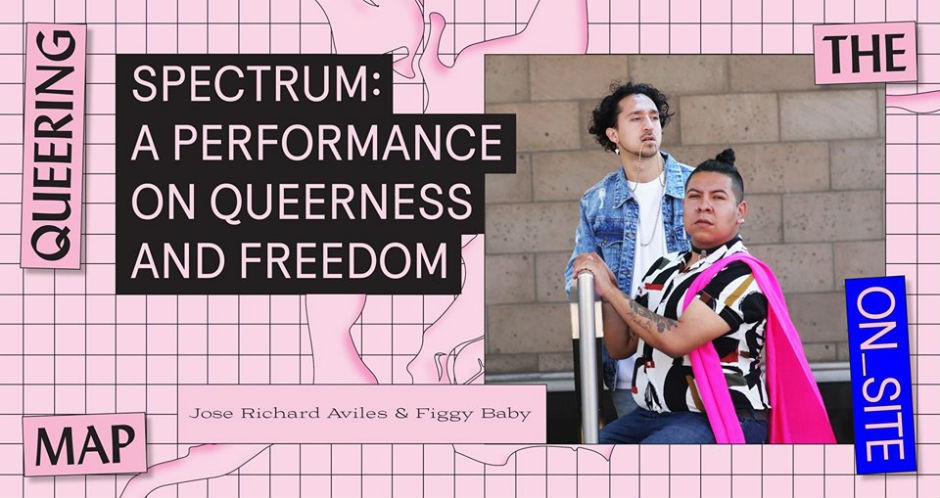 In a time where queer bodies are constantly threatened, the personal narrative becomes the counter-narrative. Jose Richard Avilés and Figgy Baby invite you to a Queer celebration of dance, music, hip hop, and theater.

“not built, only implied, and usually invisible . . . useless, amoral and sensual space that lives only in and for experience.” -- Aaron Betsky, Queer Space: Architecture and Same-Sex Desire

Callejera is a multimedia art piece that explores the testimony and spatial analysis of the Queer Ethical Subject. Historically, Queer folk, especially Queer folk of color, have been othered and ostracized to edges. It is in those edges, under the pressures of heteronormativity, that queer people have had to self-determine and create what Betsky defines as the “architecture of self.” This piece looks at the author's life and experience as a queer bus rider in the city of Los Angeles to create a piece of spoken word, dance, and film. Callejera, spanish for Women of the street, is an homage to the Femmes that learned that the city was their first stage.

“I’ve seen the anger in many my brothers eyes. It’s only a matter of time, till’ we all blow up. Make another violent decision. How many tears have we caused, cause we can’t let our own out?” -- Lyrics from “Seams” by Figgy Baby

Purple is an interactive hip hop performance reimagining masculinity, fatherhood and self-worth. Figgy Baby’s thoughtful lyricism and high-energy stage presence invites the audience to celebrate their own experience and believe in hope for healing. Using rap, dance, and spoken word Purple creates a vulnerable and welcoming space for all.

Jose Richard Aviles is an Angelino seeking ways to find movements that are authentic to all of their identities and skins. They hope to inspire and empower others to become activists in their lives all while unpacking the epistemology of queer bodies and policing of desire.

Figgy Baby is a rapper, performer, and community builder in Los Angeles, who creates work mainly around mixedness and masculinity. They wrote and starred in a nationally touring hip hop theater show, "Mixed-Race Mixtape." which recently was released as a full-length album, available on all streaming sites. Figgy's work strives to create a fluid space that recognizes identity and truth as continuously changing and progressing aspects of life.