No equipment needed and suitable for all levels of fitness. 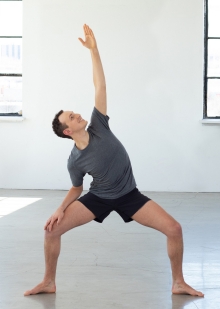 Sasha is an Essentrics master trainer and Essentrics TV workout host. He began his journey with Essentrics in 2010, taking classes at the Montreal flagship studio with creator Miranda Esmonde-White while training as a national-level figure skater. He shortly began his certification under her supervision and has been teaching even since.

His experience as a high-level athlete, his long-lasting relationship with Essentrics and his curiosity for movement have given him invaluable tools, allowing him to contribute to his students’ overall health and well-being.

Besides Essentrics, Sasha earned a bachelor’s degree in liberal arts at Concordia University and worked in two notable contemporary art institutions in Paris, France. His growing interest in film and TV production brought him back to Montreal in 2017.