Michelle d’Auray, Ambassador Permanent Representative of Canada to the OECD 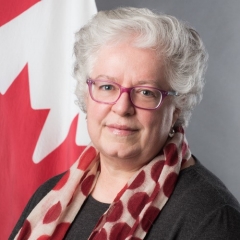 Ms. d’Auray was appointed Ambassador, Permanent Representative of Canada to the Organisation for Economic Co-Operation and Development, in Paris, on January 21, 2015.

Ms. d’Auray has broad and varied experience in government, with over 10 years as a Deputy Minister (the most senior level in the public service). Ms. d’Auray was the Deputy Minister of Public Works and Government Services Canada, from 2012 to 2015. This department is the Government of Canada’s principal procurement and real estate and asset management organization, including military procurement, for which she developed and implemented the Government’s overall strategy.

She started her career in the cultural sector and has worked in communications, information technology, policy development, and management.