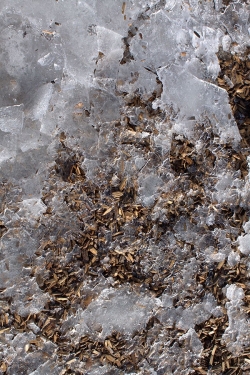 Imagination matérielle presents a series of high resolution digital macro-photographic pictures approaching Gaston Bachelard's material imagination concept as it was developed in his psychoanalytic essays on elements. By transposing Bachelard poetic writing process to a photographic approach, we took inspiration from the metaphysical posture and oneiric perspective of his research to address the ice element as it deploys around the Montreal insular landscape. In seeking to adopt the point of view of the observed object instead of the observer, the multiple states and morphological incarnations of this element are presented from an angle where the psychological perspective of the matter is exposed.

Presenting large format color prints on vinyl, each piece of the project leads the public to penetrate the conceptual framework of the subject so its visual codes, language structure and own specifc imagination is shared. These digital prints can thus be understood as epistemological tools for thinking about the concept of imagination and for refecting on the principles of human agency and the role of technological interfaces in the process of creating images.