#MariellePresente: world solidarities and painful realities and memories among Feminist/Queer/Black movements in Brazil 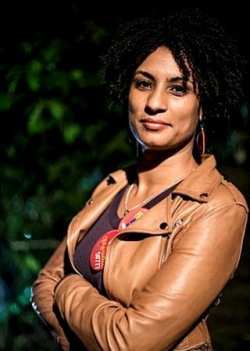 This talk will address the painful political and sociocultural context surrounding Marielle Franco’s murder in Brazil in 2018. Franco was a Black, lesbian, feminist, activist, mother, partner, politician and sociologist whose work focused on police violence and police militarization. Her assassination constituted both a collective loss and a drastic turning point for those engaged in social struggles and the fight for justice for marginalized populations in Brazil.

The attack against Marielle Franco — considered a powerful social symbol and, by extension, a direct attack against leftist ways of thinking and the social achievements of Black, feminist, and queer movements in Brazil — can be perceived by some as a lost battle in the fight for equality in Brazil.

In the middle of the historical violence that characterizes Brazil, which includes high rates of hate crimes and police brutality that comprises even murders — particularly against Black people — Marielle’s assassination became a sheer message for various social movements to realize what has socially been lost and the high stakes that Brazil faces regarding social equality today.

Felipe Martins Fernandes, professor at the Federal University of Bahia, uses Franco’s murder as an analytical site to disentangle Brazil’s evolving political and sociocultural context. This includes the various stances and social policies developed around gender, race and sexuality — and their connection to left- and right-wing political fields — before the impeachment of Dilma Rousseff from the Worker’s Party, during the coup d'état that led Michel Temer to power and the election of right-wing Jair Bolsonaro.

Fernandes also analyzes how Franco’s political life and death, such as questions on who ordered her assassination, have encouraged the development of transnational solidarity movements, including Montreal.