“Take it off! This is America!”: The Materiality of Headscarves and Hatred in the Benev(i)olent West

In North America, Australia, and Europe, Muslim women disproportionately bear the brunt of anti-Muslim hate. Through an examination of hate crimes statistics, media accounts, and institutional reports, this project seeks to examine how Muslim women are racialized and gendered through hate crimes primarily triggered by material markers of religion.  The targeted  Muslim women wear some type of head covering. While these women differ in age, race, ethnicity, class, language, and the Islamic traditions they practice, the type of physical and verbal violence they experience is notably similar. Further, these attacks often occur in public spaces, often in full view of their accompanying children, and are seldom if ever interrupted by bystanders. An analysis of hate crimes exposes the tension between the troublesome visibility of Muslim women as other/threat and the perennial colonial trope that equates unveiling of Muslim women with liberation by the benev(i)olent West.

Tanisha Ramachandran is an associate teaching professor of South Asian religions, and core faculty in Women’s, Gender and Sexuality Studies at Wake Forest University. She has published in various journals including Canadian Women’s Studies/ les Cahiers de la Femme, and Material Religion and has given numerous talks on issues pertaining to race, sexuality, religion, colonialism, and feminism. Her current research examines how material objects and visual markers – hijabs, turbans, and bindies—are deployed or function in the racialization of religions in the US and Canada by examining acts of violence/vandalism perpetuated against Hindus, Muslims, and Sikhs and their houses of worship: temples, mosques, and gurdwaras, respectively. 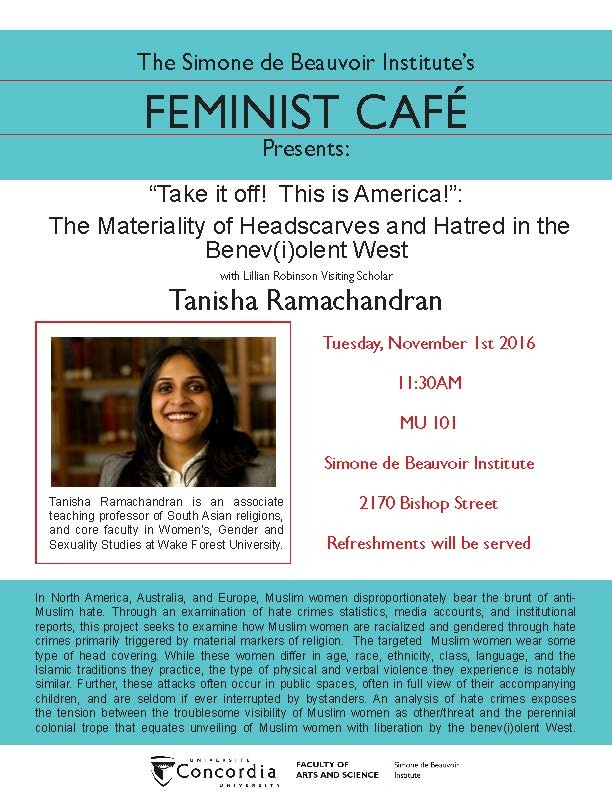