BOETHIUS: A Christian in Toga

A lecture by Prof Claudio Moreschini (emeritus, University of Pisa) 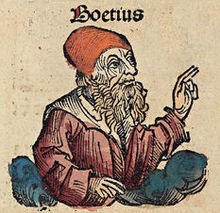 Roman philosopher Boethius, “the last of the ancients,” was one of the most influent philosophers in the Middle Ages. His Consolation of Philosophy is regarded as one of the masterpieces of ancient and medieval literature. Prof. Moreschini’s lecture will explore one of the most debated issues about this book— whether or not it can be considered a work composed by a Christian author.

Prof Moreschini is an expert in Classical Philology, Platonism and Patristics. His critical edition of the Consolation of Philosophy appeared in the prestigious Bibliotheca Teubneriana series (2nd ed., 2005). In 2014 he published A Christian in Toga (Göttingen: Vandenhoeck & Ruprecht).