As part of the Archaeological Institute of America Lecture Tour, CMLL presents Prof Tyler Jo Smith from the University of Virginia 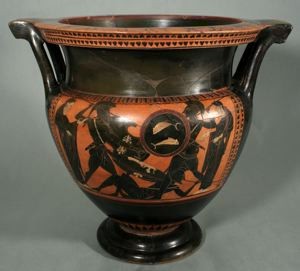 The Athenian black-figure column krater currently housed at the Fralin Museum of Art, University of Virginia was acquired in 1988. The large open vessel formerly belonged to the collection of the second Marquess of Northampton at Castle Ashby, England and was published by Martin Robertson and John Boardman in the Corpus Vasorum Antiquorum of that collection. Although unattributed, the krater has been dated based on style to the late 6th century BC. With a duel on one side, and a wedding scene on the other, this impressive and well-preserved object offers an opportunity to explore the connections between its two iconographic themes. After describing the imagery on both sides of the vase and identifying the figures and scenes with the Trojan War and the Epic Cycle, this paper take another look at the association between text and image, and the strategies employed by vase-painters to convey heroic narratives, messages, and meanings. It will also explore the history of the Greek vase collection at the university museum and the unique and important place of this particular object within it.