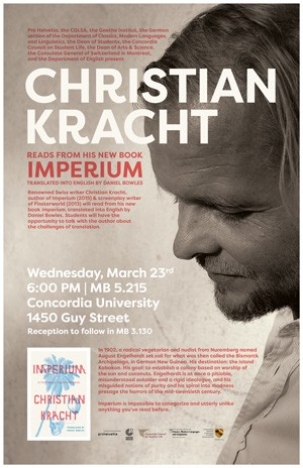 Reknowned Swiss writer Christian Kracht, screenplay writer of Finsterworld (2013) will read from his new book Imperium (2015), translated into English by Daniel Bowles. Students will have the opportunity to talk with the author about the challenges of translation.

In 1902, a radical vegetarian and nudist from Nuremberg named August Engelhardt set sail for what was then called the Bismarck Archipelago, in German New Guinea. His destination: the island Kabakon. His goal: to establish a colony based on worship of the sun and coconuts. Engelhardt is at once a pitiable,misunderstood outsider and a rigid ideologue, and his misguided notions of purity and his spiral into madness presage the horrors of the mid-twentieth century.

Imperium is impossible to categorize and utterly unlike anything you've read before.