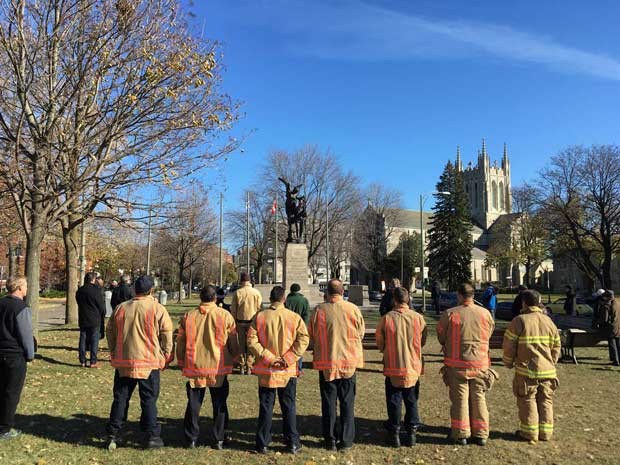 I am up from New England with my wife and son. We’re driving down a steep Westmount hill and I am thinking of the dead generations which I often do on these trips to Montreal. I grew up around here. Apparently the dead do not go gentle into that good night, after all. They return for guest appearances. Everyone over a certain age knows this. I guess it’s called “haunting”.

But this isn’t Hallowe’en. This is November 11th , Remembrance Day in Canada. And as we drive by the little park with the bronze angel and the infantryman--our neighborhood’s war memorial--I notice a dozen persons standing out there on the grass.  Not a crowd—a scattering. A collection of strangers all keeping quite apart from each other in their diffident Canadian style.

I haven’t forgotten about Remembrance Day. In fact I’ve checked and the official Parade won’t happen until tomorrow, Sunday, the 12th. The only reason we’re here right now is a road detour. Montreal is suffering an infrastructure reboot. Winter’s coming soon and even on an overtime Saturday dumptrucks are grunting, jackhammers stuttering, and streets are blocked.

So here we find ourselves.

As a kid I came every November, heard the bugle play Last Post, watched the soldiers present arms and my grandmother weeping quietly. Mother and aunts crying, too. Five stylish Montreal women spilling tears in brutal cold. It always was a cold day, unenlightened by sunshine.

Checking the time I'm shocked to realize it is five minutes to eleven on this, the eleventh day of the eleventh month.

So it is the ghosts, not the detour signs, that have summoned or guided us here.

I jam the car into an illegal spot, leave it with hazards blinking. My son and I get out, and it is really cold. Montreal’s November has a savage edge over Boston’s.

A few persons—they're not bystanders, and no one is here by accident-- have their dogs with them. Most don’t. Everyone keeps that wary distance from everyone else. I hustle up to the tablets with my son, and we touch the name of his great-uncle, John J.K. O’Brien, then return to the frozen grass and the collection of strangers—communicants?  At 10:59 a pair of fire trucks pull up. Half a dozen firefighters in heavy canvas work gear climb out to stand bareheaded and silent. Out on Sherbooke Street, one city bus drops out of the traffic stream and stops where there isn’t a bus stop. And what had been silent abruptly becomes a silence. We stand that way for two minutes, a collection of strangers, each with our own dreams, and then it’s over—for us, if not for our restless dead--and we go on our way in the cold and silver light.