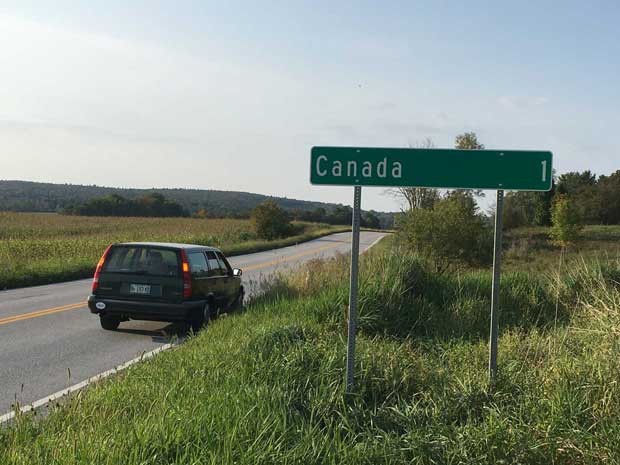 Canada 1?
I often stop to photograph this sign.
Not sure why. More or less the same photograph every time.
It seems to operate the way a powerful poem can.
Saying so little & so much all at once.
Metaphor or a mileage sign?
Maybe a suggestion.
Terse.
Brutally simplified.

If a country is a set of ideas maybe the ideas change over time. Some don't.

And only one more mile down this road--Vermont Route 108--a large portion of your life, your family, your own history is waiting to do something to you.

Mordecai might have felt something like this, returning to Montreal after the years in England, only he was coming back with his family to settle. Coming home. Planning to dig himself into this ground. Me, I'm caught between places. My son, American-born, is the fourth generation in our family born in a different country. Germany, England, Canada, the United States.

I carry with me a book that needs to be written, a Montreal book, I’ll say, if anyone asks.

Such an easy crossing.

Hundreds of refugees—not fortunate--from Trumpism were fleeing across these borderlands lately, northbound. It is beautiful country down here. Or up there. Beautiful on both sides, so when you cross the line you might feel that you are leaving something precious behind, no matter which side you happen to be leaving.

Come winter how brutal this country will seem if you are from, say, Chad, or Guatemala and the taxi hired at the Greyhound depot at St. Johnsbury drops you a wary half-mile south of the line.

It’s a question of privilege.

My father had anxiety around borders. It wasn't just the half-gallons of scotch and rye from excise-free New Hampshire stashed underneath his children in the backseat.

It was partly that, but it was grounded in something deeper.

He’d returned to Germany in the summer of 1939, intending to persuade his parents--German Catholic father, Irish mother--to leave. War was coming down. They weren't Jewish and were in no mortal danger but despised  Nazis and he didn't want to be separated from them in wartime.

Problem was they had only German passports so needed exit visas to leave. Even applying for the visa meant listing, then handing over, everything you owned—savings, real estate, possessions—to the Nazified tax authorities.

This was how Jewish refugees were fleeced.

My grandfather thought even if they were able to get to England, Canada or Eire, he would interned again when war started. That had been his bitter experience when caught in England during the First World War, and he didn’t believe he could survive another internment.

So a few hours before the war began my father left his parents on the platform at Frankfurt hauptbahnhof and made, just barely, the last train leaving for the Dutch frontier. He worried the Nazi frontier police would insist his German name made him a citizen of the Reich despite his British passport, then remove him from the train. But they didn't. And the Dutch border guards let him in and he reached Rotterdam and eventually Montreal, via New York.

On his deathbed in Montreal half a century later he came up out of a coma, sat up wild-eyed, and ordered me to fetch his passport, his suitcase. He had to get to the station, board the train, and cross the Dutch frontier before it closed.

No time to lose.

Bakersfield, Vermont. Enosburg Falls. Tonight I'm crossing the border at Morses Line and will have nothing to declare.

Frelighsburg, Québec. Bedford. Pike River. On a northeast heading, the last Appalachian hills will smooth out into the forensic flatness of St Lawrence Valley. Dairy country, steel silos, ranks of corn and tractors the size of building. Peculiar intrusion of the ex-volcano hills on the flatscape, one of them Mont-Royal but I won’t see that rise until I’m in ferocious traffic riding over the hump of the bridge.

"Why did you come this way?" the agent asks. Are you trying to sneak in through a back door? is the implication. A modern fortress of a border station hunkers on the interstate highway a few miles to the west, on the most direct line to Montreal. This post is a tiny backwater. The fields are thickened with September corn or they are dark and fallow and the warm evening smells of manure.