Graphic novelist and illustrator becomes second author in the post 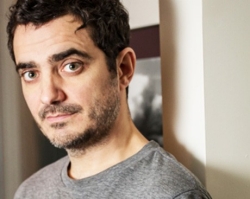 Forsythe is the author of the graphic novels Jinchalo and Ojingogo as well as the comic book Comics Class. He has just completed illustrating a new book by Lemony Snicket, due for release next fall. Forsythe’s illustrations have appeared in a wide range of publications including The New York Times and The Wall Street Journal. He also illustrated My Name is Elizabeth!, a 2011 New York Times Notable Children’s Book. Forsythe was the lead designer on the animated series Adventure Time on the Cartoon Network.

While Forsythe works in a literary format that differs greatly from Richler’s novels and satirical writing, they draw on a common inspiration.

“Mordecai Richler embraced his roots, his city, his neighbourhood,” says Forsythe. “This residency will give me the opportunity to take a deeper dive into those things in my life as I had reserved this year exclusively for writing. Doubly excited I’ll be doing so in Concordia’s [Mordecai] Richler Reading Room.”

The Mordecai Richler Reading Room was established by the Richler family in 2013. It holds Richler’s writing desk, a collection of books he kept in his home office and several of his personal artifacts. The writer in residence program was also developed thanks to the family’s generosity.

Kate Sterns, co-ordinator of Concordia’s Creative Writing Program, is delighted with Forsythe’s appointment saying, “Students will benefit from his humour, creative energy and skill at visual storytelling. Matthew’s presence in the Department of English best honours the legacy of Mordecai Richler by mentoring the next generation of storytellers.”

Beginning in January, Forsythe will be teaching a course within Concordia’s Creative Writing Program that will explore visual storytelling across graphic novels, children’s books and television animation.

If Forsythe’s appointment might be viewed as an innovative move by some, the author himself sees it as being consistent with a recent rise in respect within the literary world for the work of visual storytellers.

“I also think Richler had a healthy distaste for authority and orthodoxy,” says Forsythe. “So on that level it’s completely appropriate that this posting doesn’t follow any rules.”

Forsythe will produce a series of digital dispatches on topics inspired by Richler’s work, Montreal, the city both authors call home, and the experience of working from the late author’s writing environment. The dispatches will be available and promoted through The Walrus magazine website. Forsythe will also be giving a public event in April 2017.