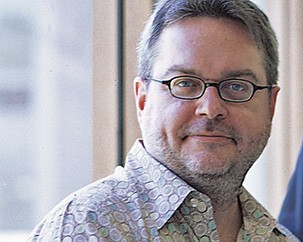 Concordia University’s Department of Communication Studies has suffered a grievous loss. On Friday, 26 February 2016, our friend and colleague Dr. Martin Francis Allor died at the Hôtel-Dieu de Montréal Hospital. He had suffered a ruptured brain aneurysm earlier in the week.

His colleagues, friends, and students are deeply saddened by the suddenness of his passing. He was sixty-one years old.

Marty has been a substantial presence in our department for over thirty years. The imprint of his vision and dedication is everywhere to be seen, from the many faculty members that he was instrumental in recruiting, to the curriculum and graduate programs he had a major hand in building and running. The very building we now inhabit – the Communication and Journalism Building at Loyola Campus – was shaped by Marty’s determined vision for our future pedagogical, scholarly, and technological needs. Marty’s commitment to the Department and the University, and to scholarship and the mentoring of students, was exemplary. With fierce intelligence and rigour, and an abiding spirit of generosity and integrity, Marty was instrumental in charting the course of communication and cultural studies in Canada.

In 1977, he completed an undergraduate degree in sociology at Oakland University in Michigan and, in 1984, he received a doctorate from the Institute of Communication Research at University of Illinois at Urbana-Champaign. Under the supervision of Larry Grossberg, and with committee participation from James Carey and Cary Nelson, Marty was in the vanguard of the development of cultural studies in North America. His dissertation “Cinema, Culture and the Social Formation: Ideology and Critical Practice,” took inspiration from Stuart Hall’s proposal concerning the two theoretical paradigms of culturalism and structuralism which lay, incommensurably, at the heart of cultural studies. Marty’s dissertation was a focused and lucid account of a possible rapprochement between the two, taking as his test case contemporary film theory.

In many ways, this work set the agenda for his scholarship over the next decades, in which he explored the epistemological stakes of critical practice and sought out potential vantage points for cultural theory. This approach is seen in Marty’s most influential contribution to the field, his essay “Relocating the Site of the Audience” (1988). Published in Critical Studies in Mass Communications – one of the leading venues for the new cultural studies research that would provoke and transform the humanities in the 1990s – the essay surveys and reassesses theorizations of the audience from the points of view of political economy, post-structuralism, feminist reader-response criticism, cultural studies, and postmodernism. “The audience exists nowhere,” he provocatively concluded, “it inhabits no real space, only positions within analytic discourses” (228). The journal editors considered the text to be of major significance, and solicited, for the same issue, four critical response essays from high-profile scholars – John Hartley, James Lull, Kathleen Newman, and John Fiske – as well as a reply from Marty. The essay continues to be cited today, and it remains a benchmark for audience research in media and cultural studies.

Between 1982 and 1984 he was a Lecturer in the Department of Theatre and Communication at the University of New Hampshire, in Durham, where he taught courses in mass communication, cultural studies, media theory, and television production. Throughout this time he also worked in various capacities (film and tape editor, associate producer, development coordinator) at television and radio stations in Champaign – CBS affiliate WCIA-TV, WEFT-FM and WUNH-FM. For years afterward, Marty would fondly recall the late nights working to trim films to broadcast length. But more importantly, from this work arose his longstanding preoccupation with video and television production – two of his most infectious interests.

Marty was initially hired at Concordia as a two-year replacement for Father John O’Brien, the founder of the Department, who himself only just passed away in November 2015. He received tenure in 1989, and was promoted to Full Professor in 2004. Marty taught widely in our undergraduate and graduate programs, and is perhaps best known for his Media Criticism course, a core undergraduate course that he has taught over the last decade.

Of all his contributions to university and scholarly life, his mentorship of graduate students is particularly noteworthy. Marty was a dedicated and active supervisor in our graduate programs and in the PhD in Humanities. Over the course of his thirty-two years at Concordia, Marty graduated thirty-five MA students and twenty-two PhD students. And although he disdained such metrics, the fact that the majority of his PhD students now occupy academic positions at institutions in Canada and elsewhere is a testament to Marty’s influence as it continues to reverberate through another generation of cultural and media studies scholars, artists, activists, practitioners, and students.

In the very concluding passage of his dissertation, commenting on the viability of the conceptual tools he was proposing, he wrote:

Theory and critique are provisional, pragmatic activities. As Stuart Hall has argued, there are no guarantees... Even more importantly, they may provide us with the tools with which we can intervene into cultural and communicational processes in order to facilitate more democratic societies. We have no guarantees, but we do have the ability and the duty to continue improving. To paraphrase Marx, our task is to change the world, not merely to describe it (p. 156).

No mere idle thought, he took this pithy paraphrase seriously. Above all, Marty sought to intervene, to produce a more democratic world, and to instill in his students and colleagues the duty to do the same. His time among us was tragically short, but he patiently and gently showed us the value of a deep and full embrace of cultural critique.

We thank you, Marty. For everything.

All are invited to attend a
memorial service
celebrating his life and work on
Friday March 18th at 12:30 pm,
in the Loyola Chapel,
7141 Rue Sherbrooke Ouest,
Montréal (QC).

Share your memories and tributes to Dr. Martin Allor
Back to top